Why is ‘Raisina Hill’ synonymous with state power in India?

“Raisina Hill” has become a metonym for state power, akin to “The White House” in the United States or “10 Downing Street” in Britain. But why, exactly, did a small hillock at the tail end of the Aravalli mountain range became the governmental heart of Delhi, and indeed of all of India?

This is one of the many questions I explore in my book, Fractured Forest, Quartzite City: a History of Delhi and its Ridge. The reader might well ask: why another book on the history of Delhi? The writings on the history of India’s capital could fill many bookshelves. But there have been few attempts to weave together Delhi’s geological and ecological foundations with its millennia of complex, ever-changing political, economic and spiritual histories. My book takes as its focus the Delhi section of the Aravalli Range, a geological feature known as “The Ridge,” and often referred to in contemporary times as the “green lung” of Delhi.

While the ecological importance of the Ridge is undeniable, its importance to other facets of Delhi’s history – from its military significance to its long association with danger, transcendence and the supernatural – has often remained hidden. But it is remarkable how often the Ridge pops up in crucial moments of Delhi’s history, from The Uprising of 1857 to the trauma of Partition to the ushering in of economic liberalization.

And this is just considering relatively recent history. After all, it is not just Rashtrapati Bhavan that is located on the Ridge. It is also home to the oldest fortress of Delhi, Lal Kot, which likely dates back to the mid-eleventh century. Even more astonishingly, it is the home of myriad Stone Age sites, some more than 100,000 years old. And the Aravallis themselves are the product of dramatic geological transformations 1.5 billion years ago. These sweeping time-scales converge on the present-day Ridge, whose ecology and geology have helped feed Delhi’s explosive urban growth. 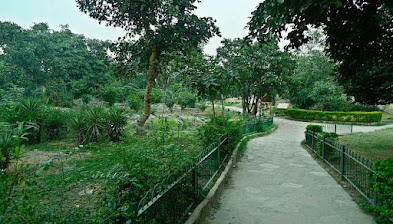 To understand Delhi, then, ecological, social and political analyses need to merge. In this time of unprecedented environmental crisis on a global scale, in which the massive air pollution problems of Delhi are just one morbid symptom, writing on the urban condition ignores the ecological at its own peril. By putting Raisina Hill, and the many other hills of the Delhi Ridge, at the front and centre, we get a new view of the city’s past – and visions of its potential futures.