A language is not taught, it is learned.

Santanu Sinha Chaudhuri, a teacher who worked for the British Council Teaching Centre (Kolkata), teaches General English, Business English, and Spoken English to adult learners. He has conducted numerous workshops at renowned institutions on diverse topics such as presentations, International English, and dealing with difficult people. SAGE is the proud publisher of his book Learn English.
While teaching English for the last 18 years, I realised that people do not learn English (or any other second language) in classrooms.

Then how do they learn?
Learning a language is similar to acquiring any other skill like music, cooking, or driving. Someone has to teach you the basics – formally or informally – but later, how good a musician or cook you became would depend entirely on your own efforts.
Experts say the immersion method of language learning is the best way to learn a new language. If you fall into a community where everyone speaks English, and if your life depends on speaking the language, then you pick it up. For example, if someone with limited English happened to start a career in New York or Brisbane tomorrow, she will have become a fluent speaker of English before a year was over. Period.

An Indian Learner’s Journey
However, the situation is completely different for English learners who don’t live in an English-language environment. For example, Ravi from the beautiful countryside of Kerala spoke only Malayalam in school, and mostly Tamil while he did Tech. Tamilnadu. Presently, he works in an automobile plant in Haryana, where everyone speaks Hindi. Ravi is a confident young man who speaks three languages and “knows” English. But unfortunately, he finds it impossible to secure a corporate job, or enrol in a US university (or a good business school) because he cannot speak and write English effortlessly.
He knows English will open up a wide horizon of possibilities before him. But how does he get there?

Ravi Can, You Can
I am Ravi. Rather, I was. When I began working, I realised that my bookish knowledge of English was of little use in the real world.
The immersion method wouldn’t work for me (just as it wouldn’t for Ravi) most places in India, my environment too did not offer a lot of models of good English.  Still, I hung on.
I read as much good English I could – literature, magazines, and op- page articles in newspapers, watched English films, and listened to English language radio broadcasts. For Ravi, the opportunities are significantly better. He has access to the Internet, through which he can

Also, most importantly for Ravi,
Therefore, from now on, Ravi should not cut off the intrusive tele-caller. Instead, he should engage her in a long conversation. He should also share his experiences and thoughts on the social media and respond to others’ posts. He could also try to form groups of people to practise English. Or he could teach someone English.
Additionally, Ravi would find it useful to have a guide to explain to him the inner structures of the English language. Once he understands the structure, it will be much easier for him to identify and remember good English.
I have always thought that while there are millions of self-learners, there is not one good self-learner’s manual in English. When I started teaching English, I also began compiling the essence of the simple processes that I followed to learn English, with particular reference to the points where Indian learners can go wrong.

The result is the book Learn English, A fun book of Functional Language, Grammar, and Vocabulary which will demolish your fear of and troubles with English. 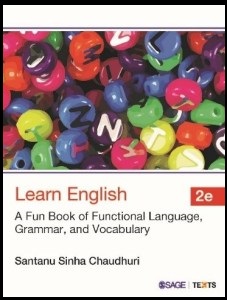 Click here for the complete list of textbooks which will help you in your course and thereon.

I believe the book will help you in your journey of mastering English. All the best.

This article was originally published on University Express, www.universityex.com on March 08,2019.