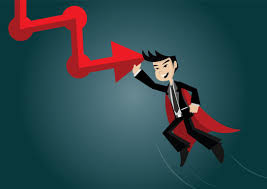 On February 18 2019 Williamson, an 18-year-old basketball star hurt his knee just 33 seconds into the Blue Devil’s matchup against their storied rivals, the North Carolina Tar Heels. During a routine play in the opening minute of the game, his left foot came tearing out of his Nike shoe. Williamson’s knee bent awkwardly and sent the player crashing to the floor in pain. Replays showed his left foot sticking entirely out of the shoe, which came apart at the outside portion of the sole. People quickly took to social media after the incident to blast Nike for the poor shoes.
In a statement released later that night, Nike said they are currently looking to “identify the issue” that caused Williamson’s shoe to fall apart. That was not adequate to contain the angst of fans which spread like a wildfire. The very next day morning Nike shares dipped by 1.6% erarsing 1.1 billion USD of Nike’s market cap.

On 9th April 2017 officials realized that United Express Flight 3411 from Chicago to Louisville, Kentucky was over booked. They first asked passengers if any of them would like to volunteer to de board the plane. Since that didn’t get the desired response from passengers, they started randomly evicting passengers. One such passenger Dr David Dao resisted. Multiple smartphone videos captured the confrontation between Dr Dao and the airline officials. In those videos it was seen that Dr.Dao was literally dragged from the airplane. Dr.Dao was subsequently hospitalized. The videos of the incident went viral globally within minutes. United was trending on social media for all the wrong reasons. Shocked and angry, passengers commented that they will never fly United again. “ If it could happen to Dr.Dao, it could happen to any of us” was the sentiment that resonated around the world. This impacted the stock price of United with reports attributing almost 1billion USD value of stock (4%) being wiped out in a day following the incident.

United’s response to this worsened the situation making it a global PR disaster. They initially issued statements that deflected legal blame, and then resorted to abject apologies that further incensed public anger over what was seen as corporate bullying and indifference. Dr.Dao filed a suit against United which was subsequently settled out of court for an undisclosed amount.

The incident raises some key questions - How do organizations be prepared to deal with crisis. What does it take to be crisis ready in today’s social media age?

A brand is not what we think it is; It is what our consumers think is. When a brand talks about itself consumers treat it as advertising. But when fellow consumers express an opinion, consumers believe that it is ‘the reality’. Before the advent of social media it took a while before a positive or a negative consumer opinion could spread. Social media has accelerated the spread of Word of Mouth. A single tweet can trigger a massive crisis.

At the last count there are over 300 million Indians using whatsapp and facebook. While twitter may still be an elite minority, it is nevertheless an extremely important platform, home to a vociferous lot of opinion leaders. News media seems to be picking their stories from social media. Good news travels fast but bad news will travel faster on these platforms. Some organizations take solace from the fact that they are not present on social media. That will not stop consumers from talking about them. While every organization would love consumers saying good things about them, most organizations are not prepared to deal with negative feedback.

While many organisations try to take recourse to the ‘legal team’ to respond to such situations, as we have seen in the United example, just being legally right may not assuage consumers. Organizations need to ensure they take a stand which is emotionally right too. On social media people react emotionally not always rationally.

Rather than keeping the onus of crisis management on legal departments alone, Organisations should set up an internal crisis squad. Of course this should include representatives from legal team too but bring in cross functional expertise so that a response can be calibrated from multiple points of view. Marketing, Sales, Human Resources, Corporate Communications, Public Relations, Operations, distribution, Consumer Relationship Management and other key personnel should be drawn in to the squad. The squad can then play out multiple scenarios and build a play book to deal with crisis situations. The scenarios can comprise of situations already experienced by the company or its competition or other known examples from different sectors. Further they can identify and pre-align credible assets (creative messages, spokesperson, brand loyalists etc) that can be activated for different crisis situations.

Crisis Squads should be able to anticipate crisis. To this end organizations should set up Social media monitoring. There are different tools available that can alert multiple people almost real time in case a particular organization, brand or person is being discussed on social media. Further the crisis squad can set up quantitative and qualitative benchmarks to distinguish between a consumer issue and a full blown crisis. An issue gaining traction will get escalated in the soonest possible time for crisis squad to calibrate a quick and credible response.

Every crisis is not the same. And therefore there can be no standard response to crisis situations. It is important for organizations to set up a crisis squad and review periodically the preparedness of dealing with situations. Fire departments always stay on high alert. Even when there has been no fire reported for months, they have a rigorous training /mock drill schedule that makes them prepared for any eventuality. That is the kind of rigor the crisis team needs to have. Run a quarterly meeting of the crisis squad even if there are no crises. Simulate through mock drills and role-plays. Keep everyone on their toes.

While responding to crisis companies should show empathy. The nature and scale of crisis should determine the course of action and the spokesperson for response.

Brands that have a clear purpose will be able to proactively engage with consumers. In crisis situations these loyal fans, evangelists often stand by their brands soothing the situation with their love and positivity for the brand. But many a time it may be essential for the CEO to deal with the crisis upfront. Before doing so it is important to quickly collect all the facts related to such incidents so that the organization is fully aware of every detail of the situation. In case the organisation has made a mistake, it is important to own and apologize for it. Put in place the necessary procedures to ensure it does not recur. Respond first to the impacted people before addressing the media. Transparency with media is essential. Focus on outcome and then on articulation. It’s important to craft the perfect story, but it’s more important that the story has the right impact on consumers at the right time. It’s easy to over-intellectualize this and become indecisive. In the age of social media, hoping that the crisis will die down on its own, isn’t an option anymore. Competitors wait to capitalise on such situations and more over stake holders can become restless impacting the value of the brand in the interim.

Crisis situations can be extremely chaotic. But there is a method to the madness. Organisations that embrace social media, anticipate situations, build crisis infrastructure (crisis squads, tools, crisis play books) believe in transparency and execute flawlessly will build brands that are truly “Indestructible” 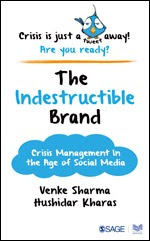 Whether or not your brand is on social media, your consumers are. They are continuously sharing their good and bad experiences about your brand. Most brands are not prepared to deal with negative feedback which, if ignored, can spiral into a crisis. This book seeks to aid brand and business owners to structure organizations to be crisis- ready.

Buy The Indestructible Brand and learn all about branding and social media!