More and more economies across the world have for a while now been experiencing what has come to be known as jobless growth – where the economy at a macro level and organisations at a micro level are attempting to do more with the same or less which translates into growing without adding new jobs.

This has led many to raise concerns about whether our much talked about demographic dividend is at all true or is a mere illusion.

Data on the ground also seems to suggest that we are experiencing jobless growth. Every other day we see reports of companies trimming their workforce, laying off employees in at least small numbers to grown without adding flab. 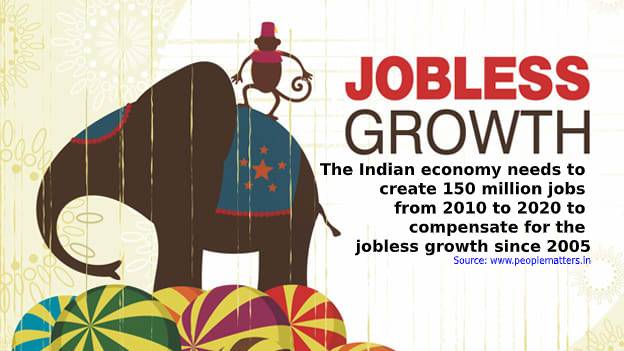 Rapid advancements in technology are only making this even more possible, especially in large people-intensive businesses. Cyclical issues in specific industry segments are only adding to the problem.

While the inability or unwillingness to add new jobs is one kind of problem, the lack of growth for those already in employment is an even more acute problem within organisations.

For decades, employees in India were driven by a social compulsion to change their business cards and don a bigger and better title ever three years. A promotion every three years was a socially accepted and expected norm. Not any longer. My own research tells me that beyond an entry-level managerial position, promotions are beginning to happen as infrequently as once in six or seven years. Gone are the days when an employee was promoted because he performed well or received the highest rating.

Today, performance and potential are hygiene factors. What is important is the availability of an open position. Most progressive companies have stopped pure time and merit-based promotions, disgruntled employees notwithstanding. They are beginning to insist that there must be an open position available for an employee to be eligible to be promoted. But then, you see there are no open positions because there is jobless growth! That means employees have to wait for someone to leave but then we are now seeing that attrition levels at middle management levels and above is almost negligible.

So, is living with jobless growth and growth-less jobs a reality that employees in corporate India need to get used to?