In Africa, land allocation is pivotal in bringing desirable improvements on the livelihoods of rural people (Bezu & Holden, 2014; Colin, 2013). This practice has been considered as an effective mechanism of development due to its tremendous contributions in supporting rural living (Boone, 2019). In this respect, land allocation to landless poor is supposed to address the problems of food insecurity, resource disparity and poverty, since it helps the poor to engage in wealth creation (Colin, 2013; Greco, 2016).

Across governments, this has been received keen attention due to the fact that availability of land has equivalently been regarded as the main source of rural living (Bezu & Holden, 2014). Hence, this has instigated policymakers and political leaders to undertake land allocation across many African countries. Particularly in Sub-Saharan Africa, it is evident that access to land has helped farm households improve their livelihoods via generating income, maintaining natural capital, creating physical assets and building human capital.

However, provision of farmland to landless people has recently became diminishing as the result of environmental and socioeconomic challenges (Shackleton, 2018). This is partly because there have been stressing pressures that largely compel numerous rural people to live without land possession (Boone, 2019). These include an increase in population size, scarcity of the land resource, land fragmentation owing to frequent redistribution, growth in urbanization and emergence of small towns (Bilsborrow & DeLargy, 1990).

Likewise in Ethiopia, land resource has remained as the main economic pillar and the country’s growth is highly dependent on the performance of the agricultural sector (Boone, 2019). It accounts for 42 per cent of the Gross Domestic Product (GDP), a major source of foreign exchange earnings and means of livelihood directly or indirectly for 85 per cent of the population (Central Statistical Authority (CSA), 2016; Ministry of Finance and Economic  Development [MoFED], 2016).

In the rural areas of Ethiopia, the major livelihood alternatives of the youth are dominated by farming activities (Boone, 2019). However, due to shortage of suitable arable land, farming activities are made on degraded lands in the highland of Ethiopia (Meaza, Tsegaye, & Nyssen, 2016). It is observed by Holden and Bezu (2013) that landless households in Southern Ethiopia relied more on non-agricultural livelihoods and the literature also highlighted that there is significant rural–urban migration among the youth and especially in areas with severe agricultural land scarcity. The constitution of Federal Democratic Republic of Ethiopia provides all rural residents whose age is 18 and above years the right to get arable land free of charge (Federal Democratic Republic of Ethiopia [FDRE], 2005).

Nevertheless, nowadays the country is facing land scarcity, mainly in the highland areas where population densities and growth are very high. Consequently, the constitution fails to provide land to all rural landless households as the source of income. Thus, the problem of landlessness has been emerging as the major challenge for the regional government (Boone, 2019). 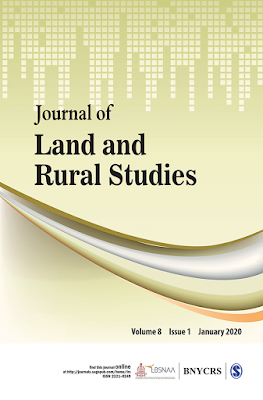 Furthermore, the problem of landlessness is a indicator of poverty, indebtedness and powerlessness in rural areas where the majority depends on land to generate means of livelihood.

The growing number of rural landless households and limited availability of cultivable land made the regional administration to cease redistribution of arable land since 1991 to avoid further land fragmentation. Now, regional government initiated to handle the scarcity of cultivable land through distribution of communal land to the rural landless households.

Subsequently, the specific objectives of this study are, to analyze the livelihood sources and dependence level of the rural landless households on the allocated communal land by the government.