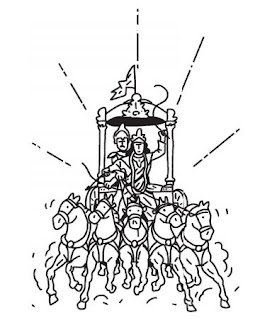 The Bhagavad Gita is one of the oldest Hindu texts. It is full of sagely wisdom and principle that are rich in morality. It puts an emphasis on righting the wrong and understanding your own sense of duty are lessons that erupt throughout the text. While over the years the context and times have changed drastically, the relevance of the book has retained. Ace V Simpson, in his book ‘Leadership Leaders from the Bhagavad Gita’ takes verses from the Bhagavad Gita and analyses them to make them pertinent to this millennium.


The following is an extract from the book which is deeply impactful and shows us how important it is to know yourself and reflect on the entity of your soul before you really influence another’s mind. It talks about the body as a vessel and the soul as eternal - That our influence is limited to the moment based on the soul that all of us carry. In a way, it talks about the mortality of beings and their immortality in the same breath:

WONDERFUL SOUL
If, however, you believe
that the soul will forever take birth and die,
even so, you have
no cause for lamentation.

For one who is born, death is certain;
and for one who has died, birth is certain,
you should therefore not lament
over that which is inevitable.

All bodies are latent in their beginning,
manifest in their middle stage,
and latent again in the end.
Why do you lament over this?

The soul dwelling in each and everybody
can never be killed.
you, therefore, need not lament
for any living being.

Reflections
A leader should seek out opportunities for learning about the soul, for it is full of wonder. Living creatures are not merely psychophysical entities but also spiritual beings. It is the presence of the soul that in fact makes the body appear attractive. You might think you are attracted to the physical features of a particular man or woman and desire their company to savour their eyes, lips, nose, hair, build or other physical attributes, but as soon as the soul leaves, the body dies, becoming inanimate and losing its attractiveness. What is truly attractive then is not the body but the wondrous soul, the life force within the body.

While the general populace is busy chasing the non-permanent illusory flickering shadows of the external material world, truly aware spiritual leaders are concerned with that which has actual substance, the fascinating soul. Further, by activating their followers’ self-awareness as spiritual beings, they trigger feelings of self-motivation among them. These internally motivated beings are goal-oriented, generally working for the greater well-being of society. For them, the means to a goal is generally as important as the goal itself, with rewards of personal wealth and power being incidental rather than causal motivational factors.