Addressing the Drivers of Carbon Emissions Embodied in Indian Exports

February 05, 2020
The annual average growth rate of real gross domestic product of India remained stagnated at around 3.5 per cent during 1950–1980, and that in per capita terms was 1.3 per cent only, euphemistically which was termed as the ‘Hindu growth rate’. In the 1980s, India’s GDP growth score abled to stay above this average but again slipped to 1.5 per cent only during 1990–1993.

During this time, India adopted the liberalization, privatization and globalization (LPG) policy and become a founder member of the World Trade Organization (WTO) in 1995. From then on, India mostly experienced a steady, steep and stable growth rate in its GDP until the global economic slowdown during 2008–2009. With this India also witnessed a decent level of industrialization and accelerated export growth rate. Although service sector has been the principal pace generator of this export growth, merchandise trade also contributed substantially. During the 1995–2014 period, the contribution of merchandise exports to India’s GDP increased from 8.6 per cent to 15.8 per cent and during the same time, the real value of merchandise exports increased by almost seven times (World Development Indicators, World Bank).

On the other hand, this increasing GDP and exports caused the fossil-fuel based energy consumption to be almost tripled, and as a consequence, the territorial carbon dioxide (CO2) emissions gathered a tremendous momentum during this postreform regime with an annual average growth rate as high as 8.8 per cent during 1995–2014, and this turned India as the third largest CO2  emitter in the world just after China and the USA with its 6 per cent contribution to 2015 global emissions (World Energy Outlook, 2015; World Development Indicator).

In spite of this growing evidence of increased trade, in one hand, and the increased emissions, on the other, still the question is largely unresolved of whether there is any missing link between this accelerated exports and galloping emission tendency in case of India. In this article, this trade-environment nexus is readdressed via three principal channels, namely—the scale effect, the composition effect and the technique effect which together constitutes the impact of international trade upon environmental pollution.

Trade increases the scale of economic activities which essentially increases pollution, hence the scale factor; trade generally alters the production structure of the entire economy, may be by specializing towards comparatively advantageous sectors, hence the composition factor and trade brings in new technological uses, either through the introduction of more stringent environmental regulations or from the cultivation of new knowledge and innovation and technology transfer from foreign countries, which might help to better handle the natural resources, hence the technology effect.
On the context of environmental consequences of free trade, Grossman and Krueger (1991) in their pioneering empirical research discussed the role of interactions among these three mutually non-exclusive factors that ultimately found to determine the ‘SO2 ’ and ‘smoke’ concentrations in Mexico after its joining in the North American Free Trade Agreement (NAFTA). 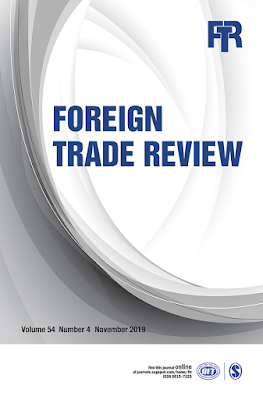 Now CO2  being the most important greenhouse gas (GHG) affecting the global climatic situation, international politics and diplomacy frequently inviting these carbon emission issues in bilateral to multilateral trade and economic negotiations and embarrassing country leaders and trade policy expert groups from both developed and developing countries. Therefore, from a policy formulation perspective as well, there is a need to investigate the factors which ultimately determine the level of CO2  pollution and the change in these levels.

—Taken from Addressing the Drivers of Carbon Emissions Embodied in Indian Exports: An Index Decomposition Analysis in Foreign Trade Review.