In the current political and economic practice, the so-called free market plays a hegemonic role over all other institutions. In Harvey’s view, the three most important features of contemporary neoliberal capitalism are “deregulation, privatization, and withdrawal of the state from many areas of social provision” (Harvey, 2005, p. 3).

Neoliberalism rose to predominance in the United States of America and Europe during the mid-1970s, but a fundamental transition in Indian economic policies toward neoliberalism did not take place until the early 1990s (Ahluwalia & Little, 1998; Kannan, 2014; Kurian, 1994; Patnaik, 1997; The World Bank, 1995).

The proponents of neoliberal economic policies argued that India needed to embrace this approach to overcome the macro and microeconomic conditions responsible for the crisis the country encountered in the late 1980s. These conditions were conceived as a great impediment to the economic growth and “development logic of industrialization through capital accumulation” (Chakrabarti & Cullenberg, 2003, pp. 239–240), and the transition of India from a country where the economy was regulated by the state to an economy with free market supremacy.
Scholars like Kurian (1994) and Kannan (2014) discussed the ramifications of the neoliberal reforms on the poor in India and highlighted the rise in rural poverty in the post-reform period. In India, the post-economic liberalization period denotes an unprecedented seizure of land from the poor by the state for establishing “development” projects such as special economic zones (SEZ), IT parks, mines, dams, infrastructure, highways, power plants etc.

As a result, India witnessed various forms of collective action against the state during this period, and especially against its efforts to protect the interests of the global capitalism. A conventional reading of the capitalist accumulation is inadequate to understand the complex ways in which capital is operating in the neoliberal global capitalist as well as the postcolonial Indian capitalist contexts. In an attempt to understand this complexity, this article focuses on the Anti-Coca-Cola movement (popularly known as the “Plachimada movement”) in Kerala, India.

Initially, it was centered on the issue of the local pollution and the scarcity of water that resulted from the establishment of the Coca-Cola Company’s bottling plant in 2000. The movement was initiated by an amalgamation of various organizations and social actors. The establishment of this plant also dispossessed the local adivasis in Plachimada from their agricultural land and deprived them of their livelihood. Like elsewhere in the country, the destruction of the common people’s livelihood (predominantly based on agriculture) in Plachimada is another instance of development-induced dispossession that negatively affected the lives of marginalized communities in India since the beginning of 1990 (Kothari, 1996; Mathur & Marsden, 1998; Mehta, 2009; Oliver-Smith, 2010). 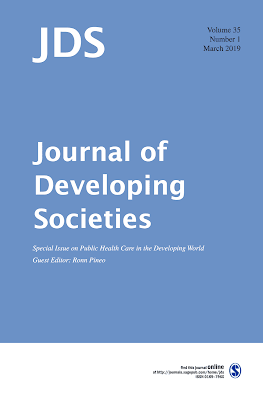 This movement has particular features in the configuration as a contemporary social movement, which have been discussed in previous studies (Berglund & Helander, 2015; Bijoy, 2006; Mooney 2012; Raman, 2005, 2007a, 2007b, 2007c, 2010a, 2010b). For example, an article published in this journal by Berglund and Helander (2015) focused on the significance of civil society and analyzed the effects of the movement’s campaign on the political participation of its members.

Unlike this, the present article goes beyond the existing social movement theories to analyze the complex interface between the “local” and the “global” in the Plachimada movement. Plachimada is a “local” space located within the regional space of the state of Kerala, which is known widely for its people-centered approach to development and the so-called “Kerala model of development.”

The article examines the reassemblage of the “local” in the context of a contemporary social movement and the relational contexts framed by the theoretical conceptualizations of neoliberalism, global corporate capitalism, and postcolonial capitalist development.

—Taken from The Anti-Coca-Cola Movement in Plachimada, Kerala in Journal of Developing Societies.