By all reckoning, India has arrived on the world stage. In the last three decades, India’s large and rapidly expanding economy coupled with its huge population and its nuclear powers captured international attention and enhanced the image of India with a profound change (Pant, 2009, p. 1).

India’s foreign policy, out of the structural confines of the Cold War strategic framework, has become more expansive in dealing with its priorities over the years. With the rise of its economic and military capabilities and strategic interests, India has shaped a diplomacy that is much more aggressive in the pursuit of those interests.

India’s relative weight and influence have been increasing over the past three decades. However, India has not attained a Great Power status. Although it is in possession of nuclear weapons and intermediate range ballistic missiles, it still lacks a global strike capability as well as serious extra-regional power capabilities. It does not decisively dominate its own region, and it is not a system shaping power in terms of either economic or military balance. ‘India is neither one of the Great Powers nor minor power; but it is one that cannot be ignored and in this sense fits the most general definition of the middle power2 … Hence, India is a rising power – a middle power moving up in the global power hierarchy’ (Sridharan, 2017, pp. 51–68).

India is constrained as a regional power by ‘geo strategic factors specifically, the possession of nuclear weapon by its neighbour Pakistan, a de-facto ally of China. Geo-strategically speaking then, India is blocked along its entire continental north by nuclear Pakistan and China …. To the south, the vast expanses of the Indian ocean hamper the development of power projection capabilities of a kind that would count in the global strategic calculation of the major powers’ (Sridharan, 2017, pp. 51–52).

In summary, India can be identified as a middle power with rising power mindset manifesting increasing level of ambition, growing military and material capabilities and expanding economy and consolidated democracy. India had forged ahead and sought pathways to acquiring military and material power that promise to bring it closer to its goal of transforming India into a ‘leading power’ (Gupta & Mullen, 2019; Subrahmanyam, 2015).

Opportunities and Challenges in the Multipolar World

The Cold War which marked much of the second half of the 20th century was an era of bipolarity. Its end was followed by a ‘unipolar moment’ dominated by the USA. Now the unipolar moment is rapidly fading; many scholars see the emergence of a multipolar/multicentre world, and Amitav Acharya (2014) prefers to call it a ‘multiplex’ world.

The emerging multipolar world offers opportunities as well as poses challenges to India’s foreign policy. In the context of rising powers in the emerging world order, Barry Buzan talks about the increasing diffusion of power as a ‘rise of the rest’ leading towards an international system in which there will be no super powers, several great powers and a lot of regional powers (Acharya & Buzan, 2019).

Multicentre/multipolar world is shaped not just by a handful of great powers and their alliances but also by newer and regional powers, global organisations, corporations, social movements and terrorist networks. Economic interdependence in the multipolar world is multifaceted and complex. A multicentre world has multiple layers of governance; regional powers and institutions enjoy a much greater significance than a bipolar or unipolar world (Acharya, 2014).

A multipolar world presents many opportunities for India. Both the bipolar Cold War and the unipolar moment or American world order constrained India’s ability to shape world order. The waning of Western dominance opens space for emerging powers like India to play active role in global affairs. 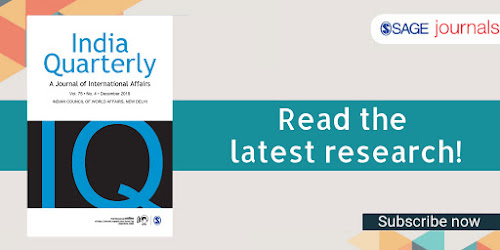