To all those, who are “shocked” by the teasers of the Dirty Picture  that’s emerging after revelations on nepotism that’s been coming out of India’s other place of religion- Bollywood – Why the shock? Are most of us not immune to ‘Khandaans” (pun absolutely intended) and “Kanyadaans”?

Ask any Indian of any age in any time – “What is Indian Culture”. Without blinking, pat comes the first reply:  Family, immediate, and extended is at the heart of our existence. On digging a little deeper - what roles are fathers and mothers and children ascribed by society – well, parents are supposed to ‘provide’ the best for their children, parents are supposed to pass on the legacy of what they have or done to their children.

Children are entitled to receive all- wealth, status, work, land, jewelry, gold, shares, and above all the connections and network their parents built for them. The same entitlement can be obviously extended to cousins and ‘close’ friends who have always stood by.

Here, the subtle building blocks of nepotism-favors returned, reciprocity, comfort, gatekeeping all stack up to create a social system we are all so used to and often and ethnocentrically take great pride in. Education, once was said to be a leveler in the game of life. Not anymore, rich kids can afford fancy degrees in Elite Universities across the world and can gain access to powerful networks and further power and influence.

It’s not only in Bollywood but in most Indian homes, offices, and organizations including political outfits where nepotism thrives. But, getting outraged and expressing shock has become a national past-time now. Bollywood too mirrors the society we live in.

We don’t like the mirror that’s been shown as a society I guess… Marriages too are very often social contracts between families, another platform that widens the network and the connections and the “khandaan”. In Hinduism, there is another intriguing aspect, the bond between the bride and the groom is sanctioned for seven lifetimes by all celestial beings!! I often wonder, how that plays within the deep psyche of our minds. Sometimes, it also makes me wonder whether the current one is the first /last or somewhere in between?

All said and done, Facebook and especially Instagram must be reveling in our love for rituals and customs and all the vivid imagery that goes into making Indian Weddings so Instagram worthy. Fashion designers, wedding planners, travel agencies, social media managers, tech-savvy pundits -Make Hay While the Sun Shines! Who knows when minimalism becomes trendy.

And while we are at it, according to an article published in the New York Times on the 28th of July, 2020 – Dr. Sapan Desai is a disputed doctor behind the dubious yet prominent research on  COVID-19. He is described   by the Newspaper as being an “ambitious physician, an entrepreneur with an MBA and a prolific researcher who is published in leading medical journals.” In short – a person who used “Jugad”.  Multiple threads can emerge here too but for another time, I guess.

Anyone, who is familiar with culture studies will always add a caveat – do not stereotype.

I wish to do the same, I do not wish to stereotype any identity. Culture is way to layered complex and nuanced at an individual and the collective level.

However, most of us are oblivious to how culture shapes the way we judge people, situations, and determine what’s right or wrong. It shapes our world views in such subtle ways and such is the power that we don’t often understand the “why” of our behavior. And that’s real power, when you don’t know anything about its source or origins.

Can’t resist, the last few thoughts. We often hear the devout in temples -promising a coconut or xxxxx amount or a promise for a good deed upon the fulfillment of their wishes. We learned to bribe Gods too!!! So corruption is “corruptions” only when we can’t fathom the number of zeros in the swindle. It’s a way of being if it’s a 100 odd bucks for dodging a traffic violation.

Mansi Kapoor is a faculty at MIT -WPU, School of Management in Pune. SAGE is the proud publisher of her book “Global Business Environment ”.
Check out the SAGE textbook here 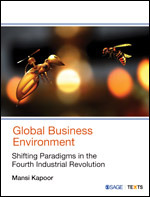