We often imagine biodiversity conservation to occur in ‘pristine’ landscapes filled with wildlife and economic development to occur in densely inhabited ones. But what happens when we have both sets of activities unfolding in the same landscape? 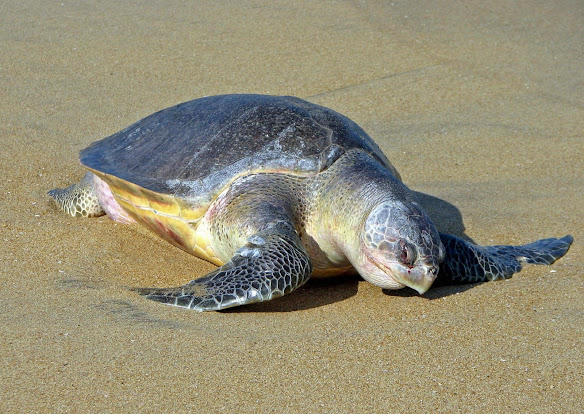 To answer this question, I used an ethnographic approach to study marine turtle conservation in a populated, industrializing region of eastern Odisha, the Rushikulya coast. This beach is globally important as a major breeding and conservation site for a migratory marine turtle, the olive ridley (Lepidochelys olivacea). It is a highly protected species that is listed in Schedule I of the Indian Wildlife Protection Act (1972) and categorized as ‘vulnerable’ to extinction by the International Union for Conservation of Nature (IUCN). At the same time, this public beach is part of the bustling economic landscape of Ganjam district - it is lined by villages for which pelagic fisheries are an important source of livelihood, the district capital (Ganjam town) is just 5 km away, and 10 km to the south is the major port of Gopalpur. There have also been sporadic attempts to map and utilize offshore hydrocarbon deposits in the area. Therefore, the Rushikulya coast offers an ideal setting to study the intersections between conservation and development.

In this article, I present the findings from fieldwork undertaken between 2012 and 2015. I found that while scholars tend to paint the relation between conservation and development in binary terms (such as conflict-cooperation, marginalization-hegemony or resistance-governance), practitioners of conservation do not share this perspective. Instead, they seem to view the relation as unpredictable, made up of both hostile and collaborative elements.

I term this as being ‘frenemies’ and in my article, I argue that it is important to recognize the ambivalent, contingent nature of the connection between conservation and development, because it enables both sides to negotiate and strategize so that their larger programmatic goals can be met despite recurring conflicts.

Some of the examples I provide to illustrate the frenemy relationship include how an initial grant from the United Nations Development Programme helped to train villagers in turtle conservation; an exploration of why neither biologists nor the Forest Department want a Protected Area in Rushikulya, whereas some large industries do; and what integrated conservation and development projects have attempted to do in the area.

I also suggest that some of these conflicts and ethical dilemmas remain unresolved, but they continue to influence how actors respond to events. Hence, I emphasize that it is vital for conservation practitioners to document and reflect on their experiences and thereby enrich conservation discourse as well as our understanding of the many ways in which conservation and development influence each other.