‘We Are Equal but Different’

Sport has proved very often a bellwether of women’s emancipation. The active participation of women like men in organised sports has undoubtedly challenged the traditional myths about females’ physical capacities1. However, sport is still considered to be a very conservative institution so far as the sexualities and gender identities of female athletes are concerned. 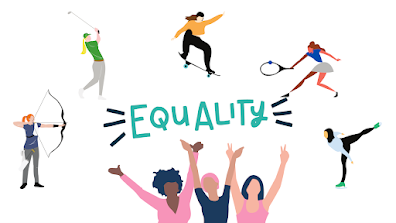 Even in the postmodern era, a physically strong girl having a muscular build is commonly called a tomboy. And equally well-performing female athlete like her male counterpart usually attracts suspicions of either adopting fraudulent practice, as, for example, doping or not fitting under gender binary segregation norms prescribed for the elite sports competitions.

The character traits necessary for sports are so incongruent with the stereotypical female roles that sportswomen have had to counter numerous attacks on their sexual identity. Women athletes at many sporting events still have to submit to the notorious sex test,—the test that is supposed to be given by women athletes only, in order to affirm their biological sex. Evidently, countless intersex female athletes were stripped of their careers, dreams and public identity as women due to this sex test. In addition, some of them committed suicide as a result. Some of the notable examples in the history of sex verification test are as follows: in 2001, Indian athlete and swimmer, Pratima Gaonkar (Prabhudesai, 2011) committed suicide after disclosure and public commentary on her that she failed sex/gender verification test. The Dutch athlete, Foekje Dillema (Ballantyne et al., 2011) was banned for life in July 1950 after she refused a mandatory sex test. Likewise, the latest cases of sprinter Caster Semenya (of South Africa) and Dutee Chand (of India) have raised eyebrow among all sports fraternity worldwide.

The present article is a ‘Feminist Critical Discourse Analysis’ (FCDA) (Lazar, 2017). By purposively selecting two contemporary cases of elite female athletes with intersex variations (Caster Semenya and Dutee Chand) as samples for indepth analysis and by using the feminist discourses as a framework of analysis alongside the advocacies of the feminist activists in favour of the cases, followed by the arguments and comments of scholars and researchers against the legal intricacies and other sociocultural issues of the cases, this article critically discusses and points out the following: how severely ‘sexist’ the sport world is; how the institution of sport is conservative and has a complete disregard of possibility of multiplicity of bodies; and how there is an overall insensitivity on the part of the concerned decision-makers/competent sports authorities and sports regulatory bodies (IAAF and IOC) towards the differences. More specifically, the article analyses the status of intersexual female athletes in sports; it enquires to know what it means for sportswomen to be physically strong and active like a man; what are the challenges they face to prove their sexuality, especially heterosexuality; how do the non-heterosexual female athletes relate to the institution of ‘compulsory heterosexuality’ in sport; how do they challenge the assumptions that their involvement in sports and anything they do, is for the purpose of serving men physically, sexually and emotionally (Rich, 1980); how do the women’s sexuality affects the way they relate to other women and to the men; how their rights are violated; and how the issues relating to their sexuality are addressed in the field of competitive sports.