Implications of Brexit for Skilled Migration from India to the UK 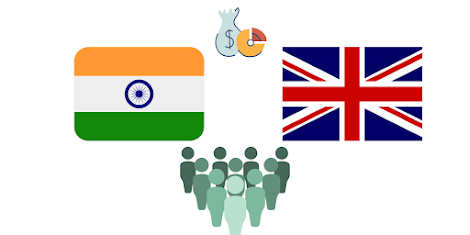 In June 2016, the United Kingdom took the world by surprise with the results of its referendum on whether to remain in the European Union (EU). With a 52% majority, the country decided to leave the bloc in which it had been a member since 1973. With this outcome began the long process of Brexit negotiations between UK and the EU. The UK officially ceased to be an EU member on 31 January 2020, with a transition period up to the end of 2020.

The decision to leave the EU came on the back of rising bitterness among people. Membership in the EU was seen as expensive and not beneficial to the country. One of the major campaigning points of the leave camp was the issue of immigration. Given that free movement of people is an important part of being in the EU, the party argued that leaving the EU would help the country take back control of its borders. 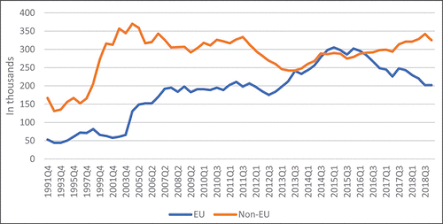 Immigration in the UK has been on the rise since early 2000s. It shot up further with the accession of the eight East European economies into the EU. Figure 1 shows how, leading up to Brexit, immigration from the EU to the UK was constantly increasing.

The growing number of foreign nationals in the country led to increased resentment among the local population against EU nationals. Several factors contributed to this resentment.

First, there was a drop in real wages in the UK after 2009. This decline, which was mainly a result of the Global Financial Crisis (GFC), was erroneously attributed to immigrants who were seen as having depressed domestic wages. In reality, real wages had actually risen during the early 2000s when immigration from the EU was on the rise and fell only after the GFC.

Third, immigrants were held responsible for the rising burden on the National Health Service (NHS). The NHS has been struggling to meet the demand for healthcare and social services, mainly due to a severe lack of funding and an inadequate number of doctors and nurses. Brexit supporters, however, attributed the problems of NHS mainly to immigrants.

Lastly, the antipathy against other EU nationals also resulted from their better socio-economic indicators. In general, immigrants from the EU tend to be younger, more educated, healthier, and their children are more likely to be educated than those of the native population. Their median income levels and rate of employment are also on the higher side. For instance, the employment rate for EU nationals (excluding the UK) was 78.7% during January–March 2016, compared to 74.6% for UK nationals.

Such resentment, spurred by a variety of factors though not always validated by facts and figures, was a major reason for the UK’s decision to exit from the EU. As promised during the campaign, the Brexiteers began work on a new immigration policy that would keep Europeans out of their country. A new immigration policy was announced by the British Home Minister in February 2020. The new policy introduces a points-based system that restricts entry of unskilled migrants to the UK from the EU. The new rules, which will be valid from 1 January 2021, put nationals from EU and non-EU countries at par. The preference now, as claimed by policymakers, would be based on skill levels of workers and not their nationalities.