Targeted Poverty Alleviation in China: A Typology of Official–Household Relations by Georgina Davie 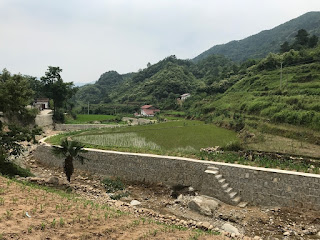 Rice paddies at the fieldwork site, Shaanxi province, China. (Source: author’s own)
Over the last four decades, China has experienced rapid urbanisation and exponential levels of economic growth, which has been successful in improving the quality of life for millions of Chinese citizens. However, in recent years, such economic growth has perpetuated an increasing wealth disparity between rural/urban, and coastal/inland areas, as income growth and poverty reduction have plateaued in China’s rural areas.
Targeted Poverty Alleviation (TPA) was announced by President Xi Jinping in 2015 as a key pillar of the 13th Five-Year Plan, with the ambitious aim of lifting the remainder of the Chinese population living in poverty, approximately 70 million people, above the poverty line by the year 2020. Most of China’s past poverty reduction schemes have targeted people at regional, township and village levels. However, there is consensus in the literature that these schemes failed to target those Chinese citizens truly living in poverty, due to misdirected funding, misaligned incentives for local officials and government corruption. TPA is different from China’s previous poverty reduction schemes, as it has been devised to have the notion of precision at the heart of every step of the poverty reduction process.

Under TPA, specific households living under the poverty line are identified across the nation, their unique cause of poverty is identified, and they are then assigned a specific local government official who must work with the household to devise poverty reduction projects that align with their individual circumstances and abilities. TPA is a novel approach to poverty alleviation, as it places the responsibility for poverty reduction on these local officials. It is up to them to ensure their allocated household can be lifted out of poverty in the 5-year time frame.
It is interesting to consider how the different personal characteristics of the impoverished household and their assigned local government cadre might influence the outcomes for poverty reduction under the TPA scheme. Based on interviews and fieldwork undertaken in two rural villages in China’s Shaanxi Province, this paper explores how the pairing mechanism between local government cadres and impoverished households operates in reality, and provides a micro-scale analysis of the sustainability and fairness of TPA now that the 2020 deadline for poverty eradication has passed.
.
.
.