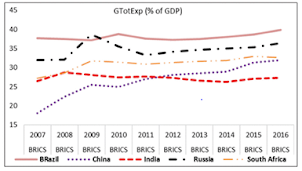 Jain et al. (year) writes that the time trend of many nations, in itself, validate that the magnitude of government total expenditure (as a % of GDP) has enlarged (refer Figure 1) and thereby has led to the probable logical impact of the size of the government on the economic growth of an economy. Figure 1 confirms the rising government expenditure (as % of GDP) for the period 2007–2016 for BRICS, selected South Asian Nations (SANs), and other emerging nations. Additionally, this enlargement has opened up the scope of investigating the nature of influence (linear or non-linear) that government size might have on economic growth.

For BRICS and SANs, the efficiencies or marginal (incremental) returns from government spending moderates out with higher spending, and even falls.. Since higher public spending often comes from bigger tax revenues, potentially higher tax rates create distortions. Further, higher tax rates in relatively poorer countries could impart unfavourable influence on the level of economic activity and hence growth. Indeed, another Nobel Laureate Edward Prescott emphasized that the significance of higher tax rates is also about changing labour supply in the USA as compared to European countries, such that growth rate suffered when government (spending) size became bigger and tax rates rose. . Besides, the literature includes several other reasons that explain the likely negative impact of a big government (spending) size on economic growth. It is put forward that larger government spending may prove to be detrimental for the productivity and capital efficiency, wealth creation process, an increase in quantum of rent-seeking behaviours of specific alliances.

In the current study, the authors chose top 16 emerging nations from the Emerging Nations’ list by Bloomberg to reinvestigate these debates. The study shows that government size cannot rise beyond estimated tipping points without hurting growth rates in such countries.