Is the inclusion of women personnel in Police department a genuine step towards making a gender-just institution?

April 19, 2017
After the Delhi gang-rape of 16 December 2012, widely known as the Nirbhaya case, the issue of women’s safety has received prominence in public discourse across the country. The city of Delhi saw massive protests by outraged citizens in the aftermath of the rape. The Delhi Police was a target of severe criticism, for its failure to maintain law and order in the city. It suffered further bad publicity as the force harassed the protesters and targeted them with water canons, lathi-charge and tear gas. Following these developments, safety of women and role of police have remained central issues in public debates, election campaigns and in the publicly bitter relations between the Delhi government and the Delhi Police working under the central government’s Ministry of Home Affairs (MHA). The police force in Delhi, which had always been a target of public criticism due to its alleged inefficiency and corruption, has increasingly been blamed for its inability to control crimes against women. 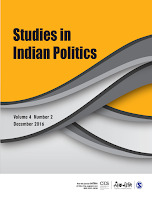 The Delhi Police has responded to such sweeping criticism through various measures. One of these was an announcement from the MHA soon after the December 2012 incident. It said that 1,000 new appointments at constable level would be made immediately, out of which 500 posts would be reserved for women. The then Union Home Minister Sushil Kumar Shinde also directed that there should be at least one woman officer posted in each police station. In March 2015, the central government had passed a proposal for reservation of 33 per cent posts for women, at the lower levels in the police forces in all union territories including Delhi (Press Information Bureau, 20 March 2015), and the Lt Governor of Delhi, Najeeb Jung had announced that the number of women in the Police Control Room (PCR) vans would be increased to 500 to ensure greater security of women. Further, various publicity mechanisms of Delhi Police routinely focus on the ‘gender-sensitive’ nature of the force by highlighting provisions, such as a women’s help desk in every police station, investigation of rape cases by women officers only, induction of more women at the police station level and training of officers on gender issues.

Such measures seem to be based on the assumption that presence of women in the police force makes it sensitive to gender crimes, and thus more effective in preventing and handling such cases. Such assumptions often do have a legal and social context. Historically, the police in India is known for its role in perpetrating violence towards marginalized sections including women.

An article from “Studies in Indian Politics” is to examine this aspect of workplace gender dynamics. The precise focus is upon inclusion of women into the police force in Delhi on the assumption of their special suitability to deal with gender-based crimes, and to study what impact such inclusion has on the structures of gendered hierarchy operative in the police station as a workplace.

But if we examine the everyday strategies of women police personnel in Delhi in their day-to-day work lives, It can be observed that the individual woman personnel has to continuously oscillate between two contrary enactments of a policewoman and a policewoman. Drawing on insights from ethnographic fieldwork, the article argues that inclusion of women on such terms does not make them equal members of the force, but only signifies a balm-applying strategy to rectify rampant gender imbalance in numbers within the institution. Such inclusion, has not yet led to any real progress in terms of making a gender-just institution.
Register now to read full article!