Let Game Sutra be your guide for moving from paranoia to positivity!

Game theorists have built an elaborate intellectual machinery to analyze decision making in interactive contexts. But sometimes this very machinery masks the valuable insights of which it is made. Hence it is time to put the focus back on the homespun wisdom of Game Theory as I do in my book Game Sutra- Rescuing Game Theory from the Game Theorists.

For instance, when I play games in my Game Theory classes at MDI Gurgaon, I always amazed by a large number of students who adopt what game theorists call ‘max-min thinking’. Max-min thinking is assuming that no matter what you do, the other players are out to get you. Hence you choose a strategy that maximizes the minimum that you could get. For instance, if you are a product manager in an IT company, you would assume the marketing department is politically predisposed to undermine every proposal regardless of merit. Hence you would present an option that is least vulnerable to their inevitable criticism. This approach also implies that any positive feedback from them would be seen with extreme suspicion.

Game Theory teaches that such thinking is only appropriate in very specific situations which we call two-person zero-sum games. These are games where there are exactly two players and one player’s gains and the other player’s losses exactly equal in every instance. Chess is an example.

But most situations in life are the non-zero sum in nature, in that they involve a combination of competition and cooperation. An example is international trade. If you are short-term non-zero-sum interaction, it may still sense to negotiate hard to grab the lion's share of the surplus on offer, provided your brinkmanship does not result in the transaction being called off. This may be called the ‘Donald Trump Model of International Trade’. But in long-term non-zero-sum interactions, one has to bring a mindset of mutual gain. No one likes with a shark on a regular basis as the US is slowly finding out.

So, the first Sutra of game theory is: Don’t bring zero-sum thinking to non-zero-sum interactions.
Move from paranoia to positivity! 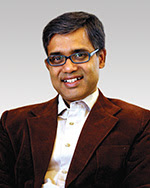 Rohit Prasad is a Professor of Economics at MDI, Gurgaon. He has a PhD in economic theory from SUNY Stony Brook, USA.