DID MILLENNIALS HIT THE REVERSE GEAR?

Much has been said after the recent statement by India’s finance minister Dr. Nirmala Sitharaman when she blamed the millennial mindset of using OLA and Uber, instead of going for the ownership of the vehicles, for the slump in the Indian Automobile Sector. The statement has been much politicized and debated across social media and news channels. However, the truth is not reflected in most such comments. Dr. Sitharaman’s remarks deserve a fair and objective analysis.

The slump in the Indian Auto sector is serious. The sector that employs close to 40 million people contributes close to 7% to the GDP. Car sales are down by more than 30%, motorbike sales are down by more than 25%. Companies have been forced to cut down on the production, triggered by this sharp fall in demand. There have already been job losses raising concerns of a further avalanche that might be catastrophic for the sector.

The question, however, is whether the millennials can be blamed for this fall in demand for vehicles. I must commend our Finance minister for getting the mindset part correct. When she points out at the millennial penchant for hiring vehicles, rather than buying them, she is correct. However, as much as understanding the mindset is important, understanding the reasons behind the development of such a mindset is equally important to take into consideration. Understanding what factors have played a pivotal role in shaping such a mindset goes a long way in engaging them as customers, as employees and as members of society.

This is not only reflected with respect to ownership of vehicles but also in terms of ownership of apartments. Millennials would rather rent an apartment, instead of purchasing one and then repaying the amount for another twenty years. And yes, the slump in the auto sector has been triggered by reasons like mandatory BSVI norms compliance, the internal combustion engine issue, severe liquidity crunch over IL&FS crisis, recent floods in many states, higher ownership costs and general poor outlook of the economy.

So what’s the point? To rightly understand the millennial mindset, one needs to understand the underlying causes of shaping that mindset in order to decipher their preferences. The rise of OLA, Uber and other app-based cab services shows a rise of a different kind of demand. Millennials need to be understood to be engaged. Empathy and not blame would engage them and in a world that is soon going to be dominated by millennial workers and consumers, organizations cannot afford to keep them disengaged.

In my last more than ten years researching, writing on, talking to millennials and talking to countless millennials from across the world, one thing has become amply clear that only a deep empathy with them and the kind of paradoxical lives that they live, will help us to understand them, their mindsets, attitudes, and behaviours. This has been the bedrock of my engagement with the corporate sector in India and the Middle-East, helping them develop strategies to engage millennials as employees and customers.

Article Credits: Debashish Sengupta, author of The Life of Y 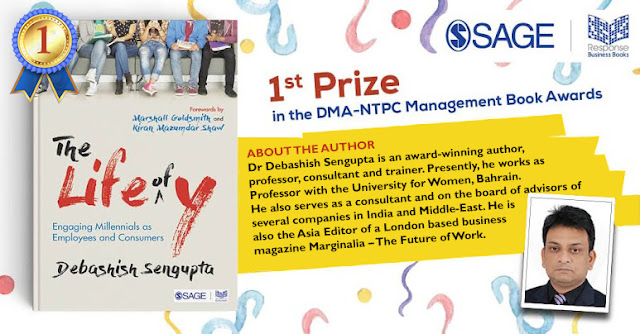