January 02, 2020
Globalization and liberalization have led firms from emerging markets like India to become more aggressive and opt for mergers and acquisitions (M&A) to fight the competitive battle. The present study attempts to evaluate the impact of mergers and acquisitions on the returns in the short run using detailed event study methodology.

The notable finding of the research is that a market starts reacting prior to the announcement. The moment the announcement information becomes public, investors start reacting and the stock price jumps high, providing positive abnormal returns (ARs) to the investors. However, post-announcement, a strong correction in the market price of the acquiring company takes place and positive ARs do not sustain.

The findings of the study have the following implications for the investors:

5.      The announcement of acquisitions financed with cash payment provides substantial returns.
This research draws the attention of managers to consider cross-border as well as domestic acquisitions as an option to strengthen their competitiveness.
They should think of cash as a mode of payment to finance mergers as issuance of shares is bad news. The management may acquire the target firm as a subsidiary and may absorb it with its own operations later on.

M&A’s rapid growth in recent years calls for research to analyse what drives firms to go for M&A and how it affects firms and markets (Andrade, Mitchell, & Staffird, 2001; Holmstrom & Kaplan, 2001). When an acquisition is announced, a considerable amount of information is revealed about the potential transaction, which can be used to assess the stock market reaction to an M&A announcement.

The effects of these announcements appear to be a good indicator of future success. The security returns around the announcement represent investors’ expectation of M&A benefits. Stock market reactions to M&A announcements could help to predict M&A profitability; moreover, short-term effects are of interests for immediate trading opportunities they create. The most statistically reliable evidence on whether M&A create shareholders’ wealth is documented by conducting event studies.

The methodology is based on the fundamental idea that stock prices represent the discounted value of firms’ future stream of profits. Hence, the change in the equity value of firms observed due to stock market response to the announcement of M&A may be considered as a measure of the (discounted) additional profits that they are expected to accrue as a consequence of M&A (Duso, Gugler, & Yurtoglu, 2010). Various studies use event methodology to analyse the short-term effects of an M&A (Asquith, 1983; Dennis & McConnell, 1986; Dodd, 1980; Mitchell, Pulvino, & Stafford, 2004; Pettway & Yamada, 1986; Schipper & Smith, 1987; Sicherman & Pettway, 1987; Schipper & Thompson, 1983). 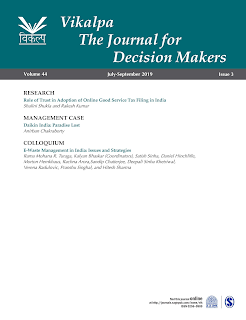 In this context, the present study proposes to conduct an empirical research to investigate the short-term performance of M&A. It attempts to gain new insights into the acquirers’ performance. As a result, the study would also provide an insight into the validity of the synergy hypothesis for Indian corporates.

—Taken from Impact of Mergers and Acquisitions on Shareholders’ Wealth in the Short Run: An Event Study Approach in Vikalpa: The Journal for Decision Makers.