To many observers, South Korea, situated at the crossroads between the USA and China in East Asian geopolitics, has been seen gradually leaning towards China in recent years; for instance, the former president Park Geun-hye (presidency: February 2013 to March 2017) participated in the 2015 grand military parade at Beijing’s Tiananmen Square, hosted by Chinese leader Xi Jinping, incurring concerns from its primary ally, Washington. Park was the only president from US ally nations to attend the ceremony, sitting side by side with Xi. Indeed, South Korea’s diplomatic footprints for the 5 years can be best told by gazing at its interactions with the USA and China. 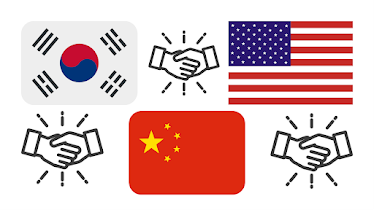 The former is its most important military-pact ally. The latter is its largest trading partner. Meanwhile, Japan has been largely missing from South Korea’s diplomatic purview because South Korea has prioritized its diplomacy towards the world’s two most powerful nations. South Korea’s ‘cold-shouldering’ Japan, the world’s third largest economy, often invites bewilderment. Meanwhile, North Korea has been the top diplomatic mandate for South Korea, especially seen as such under President Moon Jae-in (presidency: May 2017 to May 2022),1 who succeeded Park. Moon, a son of a North Korean refugee family who fled to the South during the Korean War, is known to uncommonly eager to create a breakthrough in North Korea’s nuclear crisis, often dubbed the Korean Peace Process.

Moon initially played a mediator role in the nuclear negotiations between Washington and Pyongyang that culminated in the historic Singapore Summit in 2018 between Donald Trump and Kim Jong-un. Yet, the talks fell into a stalemate after the collapse of the Hanoi summit (2019). The talks have since not found a new momentum, while Trump stepped down in January 2021, despite his disgraceful attempt to stay in power by mobilising a vote ‘fraud’ protest in Washington DC that turned violent. Moon’s term is also waning as South Koreans will vote a new president in March 2022. Moon’s term officially terminates 2 months afterwards.

Taken together, South Korea’s diplomacy for the past several years could be summed up as the world’s 12th largest economy (IMF 2020), struggling to find its niche in the intensifying rivalry between the USA and China, while its waning relationship with Japan was relegated to the back burner; the Moon Administration identified the improvement in inter-Korean relations as a leverage builder in dealing with the world’s two superpowers and secure diplomatic autonomy. However, with the North Korean nuclear negotiations in a prolonged deadlock, followed by COVID-19, South Korea stands at a diplomatic low point, while its domestic economy was hit hard by the pandemic. This article covers major events in South Korea’s contemporary foreign policy up to the present. It does not attempt to be comprehensive2; instead, it provides details and nuances of a few select events to highlight Seoul’s motivations and considerations. Looking ahead, South Korea feels uncertain about how the future unfolds from here.

For years, South Korea has walked on a tightrope between the USA and China, trying to seek autonomy from the USA to deal with China, its largest trade partner, and flexibility to engage North Korea. Moon’s balancing strategy between the USA and China, the sitting power and the rising power, has been bumpy. So far, South Korea seems not have been noticeably successful in taking advantage of the US–China rivalry either. Former Minister of Foreign Affairs Yun Byung-se had stated that Korea is being ‘wooed’ by both the USA and China (May 30, 2015).