- Contemporary Review of the Middle East 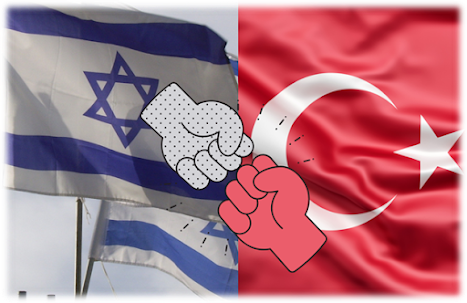 Being strategic partners during the1990s, the relations between Turkey and Israel have downgraded and finally deteriorated in the recent years. There has occurred a deep crisis between the two countries, particularly since 2009, but the beginning of the deterioration dates back to the early 2000s. Today both countries designate each other as opponents despite the history of a strategic partnership. What are the reasons for this radical shift in the Turkish–Israeli relations? This article analyses the rupture in the bilateral relations with a particular focus on the recent events. The survey of Turkish–Israeli relations is evaluated via three levels of analysis laid by Kenneth Waltz which helps analyze how foreign policy decisions are made at various levels and identify causal factors of international politics. According to this approach, a state’s foreign policy could be analyzed via three levels, which include the systemic level (the interaction between states), the domestic level, and the individual level (leaders).
The “three images” approach identified by Waltz suggests that the first image is the individual level for which the locus of the important causes of war is found in the nature and behavior of human beings, and it emphasizes the role played by individual leaders in determining the direction of government policy. The second image, the internal structure of states, focuses on the internal constitution of the state, such as its ideological underpinnings, including societal and bureaucratic factors within. The factors that can impact foreign policy at the domestic level include regime type (democratic, authoritarian, totalitarian), electoral politics, bureaucracy, political culture, public opinion, and interest groups. The third image is the international system, whose main concern is the structure of the international system rather than the actors themselves; yet, the actors’ behaviors are determined according to the structure of the system.
Hence, the study argues that the bilateral relations have taken shape according to these three levels in different times and that the deterioration and amelioration of the bilateral relations hinge upon the identity and ideology of the leadership at the individual level, domestic factors at the state level, and structural factors related to the conjuncture at the systemic level. In this regard, it seeks to reveal which of the levels of analysis are in play in the determination of bilateral relations beginning from 1948.
The beginning of 2000s witnessed changes of governments in both Turkey and Israel. Likud in Israel and AKP in Turkey came to power in 2001 and 2002, respectively. There has been a change in the Turkish foreign policy beginning from the AKP government as the Middle East has been given more importance due to the region’s historical link to the Ottoman Empire. In this period, Turkey pursued a policy of “zero-problems with neighbors” and the role of mediator between Israel and Arab states. The fact that Turkey followed a pro-Arab and pro-Muslim policy has been interpreted by Israel as the shift of axis. This gradual cooling in relations was due to the changing regional conjuncture, the diversification of interest at the domestic level and the ideological stances at the individual level.
However, the Turkish–Israeli relations have been fluctuating from the beginning, long before the AKP came to power. Those fluctuations were either due to the factors at the international level or at the state level. However, it is no doubt that the greatest blow to the bilateral relations has occurred during the AKP government.
.
.
.